SoCal SuperTrucks backed Team Rocky Mountain ATV/MC made their way to Mercedes Benz Stadium in Atlanta, Georgia this past Saturday night for round nine of the 2020 Monster Energy Supercross Series. It turned out to be a tough night for the team, as rider Blake Baggett would not have the race he was hoping for. 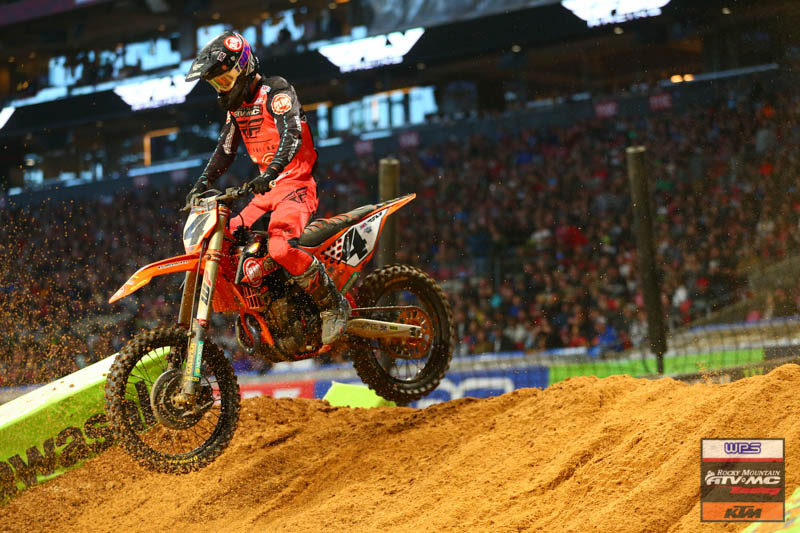 After the gate dropped for the 2nd 450 heat, Blake Baggett would get held up at the first turn, putting him outside the top ten after the first lap. He kept up the focus and moved forward to 8th place by the half-way mark of the race. Then on the last lap he got on the gas to advance another position, finishing in 7th and transfering straight to the main. The start of the main event saw Blake shoot off the line, making it around the first corner in 5th. Almost immediiately he wound up in a battle between Dean Wilson, Eli Tomac and Jason Anderson. He was moving forward through the pack until a misguided pass attempt from Eli Tomac would take down both of them. Unfortunately this would end Blake's race, as he was forced to stop in the mechanic's area to repair his bent up bike. He did, although, return to the race to finish the night in 19th place.

“A shame my race was taken away like that. I felt good tonight and my speed was there. It’s unfortunate how things ended here as we had a good shot at a top three. The main thing is we leave here healthy, focused on Daytona next weekend and a podium.”

The team now heads to the Daytona International Speedway in Daytona, FL for round ten of the 2020 Monster Energy Supercross Series.