This past weekend Team Rocky Mountain ATV/MC traveled to Thunder Valley in Lakewood, CO for round eight of the 2020 Pro Motocross National Series. Justin Bogle put in his best race of the season, ending the day with a well-deserved top ten finish.

Blake Baggett looked had the Thunder Valley track figured out right away during morning practice, posting the 2nd fastest time of the day. He continued to show confidence in moto one, as he would get a good start off the gate, coming around the inside of turn one sliding inside the top five. Blake found himself in a battle with Justin Barcia and Eli Tomac early on before slipping back to 6th place. He kept the speed and hitting his lines crossed the finish line in 8thplace at the checkered flag. Unfortunately, he did not line up for the second moto due to a hand issue caused when he severely jammed two of his fingers during lap two of the first moto. Both fingers swelled up so much, it got to the point where he would not be able to hold on for a second moto. Blake is getting it checked out, adjusted, and looks to finish off the season this weekend at Pala in a tight back and forth battle for the top 5 championship points overall. 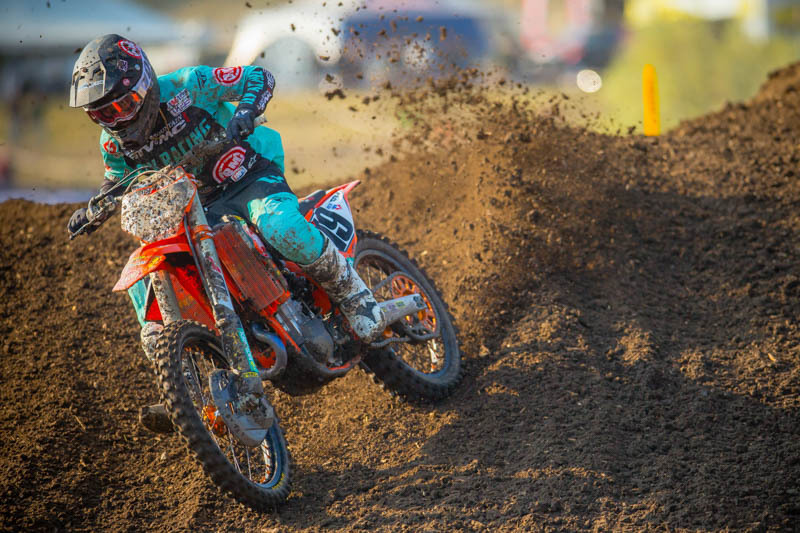 Justin Bogle started off moto one with a great launch off the line and up the start straight to come around the first turn inside the top ten. Justin rode with determination, as he fought through the top ten for the first half of the race. He would fall back a few spots, crossing the finish line in 12th place at the checkered flag. At the start of the 2nd moto, again Justin got out of the gate inside the top ten then started pushing his way to 7thplace by the end of lap one. Riding one of the best motos of his season, Justin found himself in a battle with Justin Barcia early in the race. The moto came together for him and he took 9th at the checkered flag, earning 9th overall for the day.

“Today was a good day. I was in the groove all day and feeling really fast on the bike. We have been working hard and it feels good to put in two solid motos like that to earn a top ten for the weekend. I’m ready to end the season strong with another top ten ride next weekend at Pala.”

Team Rocky Mountain ATV/MC-KTM-WPS will now travel to Southern California and Pala Raceway for the final round of the 2020 Pro Motocross National Championship.