SoCal SuperTrucks Supported Team Rocky Mountain ATV/MC made their stop at Daytona International Speedway as it held stage to Round 10 of the 2020 Monster Energy Supercross Series this past Saturday. The race marked the return of Benny Bloss to the team, as he will be filling in for Justin Bogle for the remainder of the season.

Blake Baggett looked very comfortable on the Daytona track during the afternoon practice sessions. Showing tons of speed, he posted the 6th fastest time of the day. Blake used that advantage in his heat race, where he shot off the gate and came around the first turn inside the top ten. Getting on the gas hard, he moved himself just outside the top five, crossing the checkered flag in 6th place. In the main event, Blake would get pushed wide around the start, and catch his footpeg on a tuffblock that would send him to the ground taking a blow to his shoulder, effectively ending his night.

The team and Blake will issue a statement this Thursday on his condition and his ability to line up at Indianapolis this weekend. 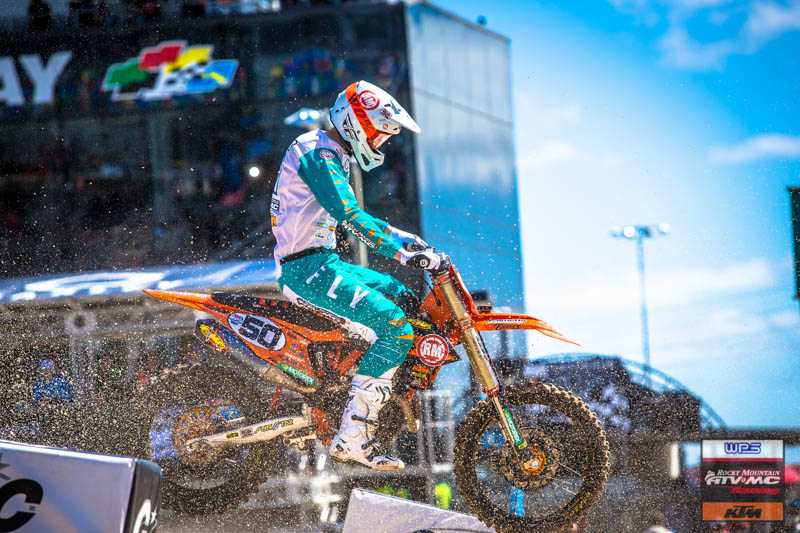 Making his return to the team for the remainder of the Supercross season, Benny Bloss looked like he picked up where he left off last year, posting the 8th fastest time of the day. In his heat race, Benny left the gate strong and navigated the first turn right behind his teammate inside the top ten. Benny kept that speed, hitting his marks consistently finishing 7th. In the main event, a good start for Benny allowed him to run just outside the top ten for the entirety of the race, finishing the night in 12th place.

“I’m very happy with how my first race back with Team Rocky Mountain ATV/MC-KTM-WPS went tonight. I felt comfortable on the bike out there and thankful for the opportunity. We will make some changes to the bike and be ready for a top ten next weekend in Indianapolis”

The team now heads to Indianapolis, IN for round eleven of the 2020 Monster Energy Supercross Series.