Team Rocky Mountain ATV/MC made its final California stop Saturday night as round six of the 2020 Monster Energy Supercross Series took over Petco Park in San Diego, CA. The team’s KTM race bikes were dialed in with a special camo theme for Military Appreciation night thanks to HBD MotoGrafix, Seat Concepts, and Acerbis. Ready for battle, Blake Baggett would earn his first podium of the 2020 season. 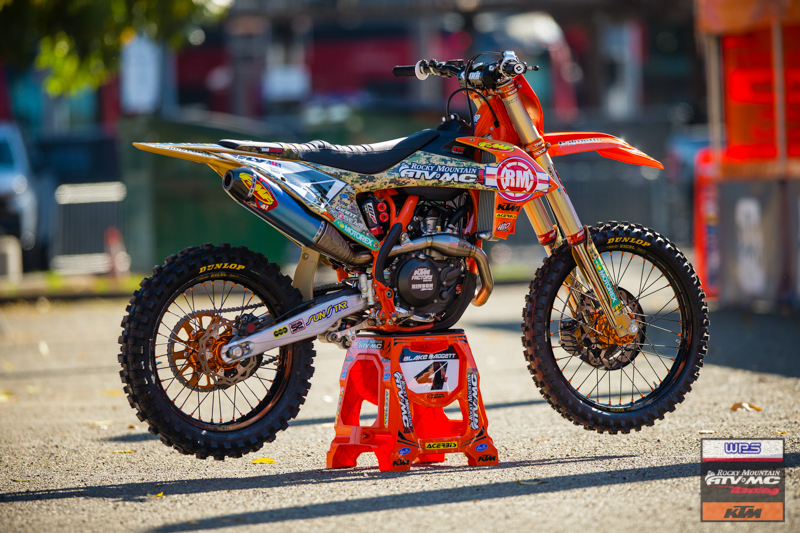 Thanks to sponsors HBD MotoGrafix, Seat Concepts and Acerbis, the look of the team’s factory KTM 450SX-F was ready for Military Appreciation night in San Diego. Photo Credit: Kardy Photo

Blake Baggett entered into San Diego ready to do battle. Sporting special Fly Racing Military gear, he put in top times in each of the qualifying sessions to earn the 5th fastest time of the day. Taking that momentum into the heat race, Blake shot out of the gate and came around the first turn in second place. He quickly found himself in a battle with Justin Brayton but slid back to 3rd place a few laps later. While keeping Brayton in sight, Blake came under attack from Jason Anderson late in the race. Both went back and forth before Blake overtook Anderson to take back 3rd place and a spot in the main event. 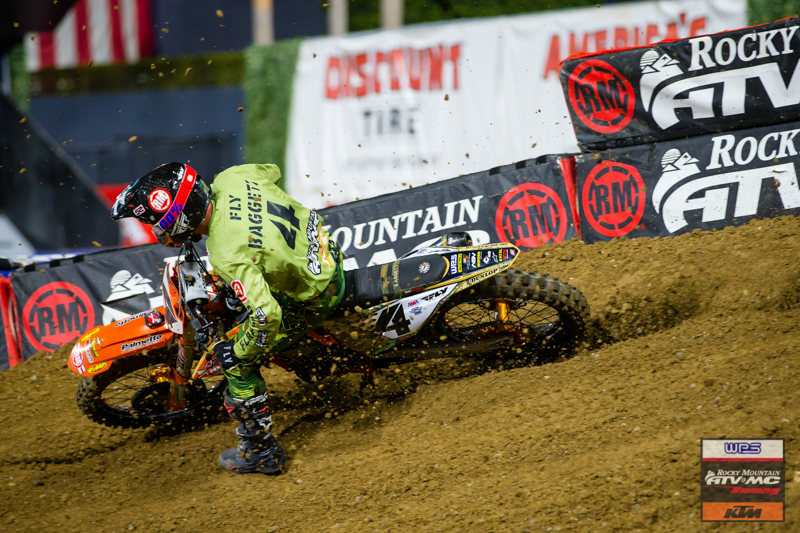 In the main event, Baggett got on the gas hard to lead the pack into the first turn grabbing the holeshot. He then got stood up in the next corner and got pushed back to 6th place. He moved forward quickly, though, and moved into the top 5 to start chasing Aaron Plessinger down for 3rd place. Blake put the pressure on and forced a mistake that allowed him to move into 3rd. He then set his sights forward and came within striking distance of 2nd place in the final laps. At the checkered flag Blake secured a 3rd place finish and his first podium of the season.

“Tonight was a good one. I finally put it all together and had great starts all night. Feels good to be back on the podium and we are moving in the right direction. We will be ready to battle for another podium next weekend in Tampa.”

The team now leaves the west coast and will head to Tampa, FL for round seven of the 2020 Monster Energy Supercross Series.