Team Rocky Mountain ATV/MC journeyed to the Midwest for round three of the 2020 Pro Motocross Championship Series at Ironman MX in Crawfordsville, IN. The number 4 of Blake Baggett again put in a top-10 overall and teammate Justin Bogle overcame a gnarly first-moto crash to put in a top-20 race.

Blake Baggett came into the third round raring to go as he launched out of the gate, rounding the first turn inside the top 10. Soon he found himself in a five-rider battle for position but immediately started moving forward. Blake motoed through the field and made his way to 6th place by the middle of the race. With two laps to go, he jumped into 5th place where he took the checkered flag. In the second moto, Blake came around the first turn at the very end of the top 10. He would not remain there long though. By the mid-point of the race, he would make his way forward into 7th place. Blake hit his lines, and finished the second moto in 7th. His 5-7 score earned him 7th overall for the day.

“I felt good out there today. My starts were there and I had the pace in both motos. We will put in the work this week, and make a few changes to the bike for a top five finish at RedBud next weekend.” 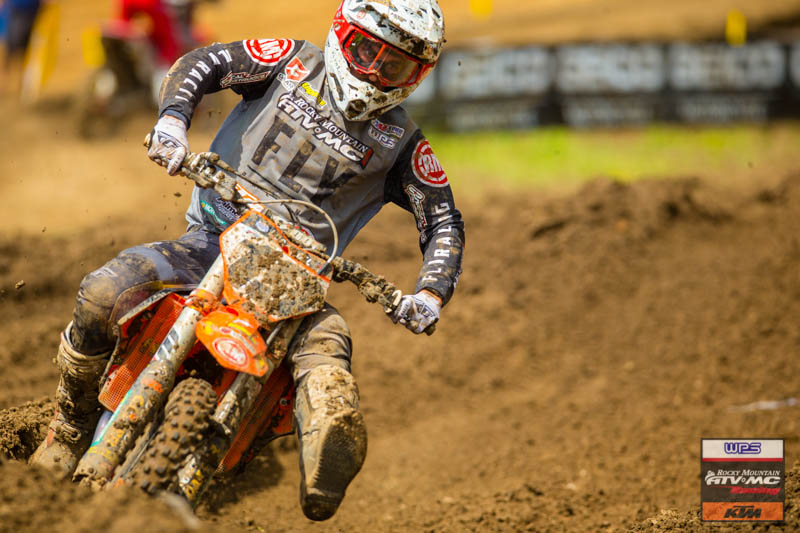 During practice, Justin Bogle looked comfortable on the Ironman track, and he would bring that confidence to the start of the first moto. He shot out of the gate and stayed on the gas, making it to the first turn inside the front pack. Unfortunately, his race would come undone, as Justin’s front end would wash out on him coming into the slick first turn which stood the bike up and sent him to the ground hard. After being checked out by the track medical crew, Justin would return to the track to finish the race. The second moto forced Justin dig deep as he rounded the first lap buried in the back of the pack and around 30th place. He did not let up, though, and ultimately, worked his way forward on the rutted track to break into the top 20 by the halfway point of the race. Not letting up, he would push through, overtaking several riders, to finish the moto in 15th place. His strong ride in the second moto earned him 19th overall for the day.

“Not the day I was looking for. I felt good coming in and had a great jump off the gate in moto 1. It was unfortunate I went down the way I did, because I rode well in the second moto. We are making progress and looking forward to the doubleheader at RedBud next weekend.”

Team Rocky Mountain ATV/MC will now head north to RedBud MX for round three and four of the 2020 Pro Motocross Nationals in Buchannon, MI.